"Take Shelter powerfully lays bare our national anxiety disorder — a pervasive dread that Curtis can define only as 'something that's not right.'" - Melissa Anderson

Anxiety is related to our fragility, our vulnerability, in a world that doesn't feel secure, whether it actually is or not.  When we have something to lose, we feel insecure, which creates anxiety.  Deeper level anxiety comes from the experience of shame (maybe from failure, hand-me-down wounds, cultural or religious perfectionsim, or various levels of abuse), which unless we are able to process through it towards understanding & acceptance, we won't learn much about ourselves, who we are, or who we are becoming.  This type of anxiety will absolutely enslave or imprision us - and it has already been proven that anxiety is more powerful than logic in cases of Post-Traumatic Stress.  I would also suggest that our basic insecurities & anxieties can carry that same power when we are forced to confront our limitations, often due to some level of relative "crisis".

Curtis becomes less functional as he begins to obsess over the visions of a coming apocalyptic storm, which is the product of the inner storm brewing within him.  Like many men in the Western world, Curtis is expected to control his external world - to provide, to be responsible, to work, to fight if necessary, and to ultimately be perceived as strong & good & right.  To ask for help is considered a failure.  To have your integrity in question is an abomination.  To admit that you are a flawed human being is incomprehensible - something only necessary for alcoholics and drug addicts, not "good" people.  But for all of us, this admonition of being imperfect, an addict, a sinner, a slave, a prisoner, a prostitute, a failure, etc., (whether literal or symbolic) is the only gateway to any kind of inner life, emotional process, and authentic spirituality.

This is why the symbolic scene of death & resurrection (baptism) in Take Shelter is so powerful.  As Richard Rohr describes, "Enlightenment...is more surrendering than concluding, more trusting than fixing. You cannot get yourself enlightened by any known program, ritual, or moral practice. All you can do is stay on the journey, listen to it's lessons, both agony & ecstasy, and ask for that most rare & crucial of gifts: true openness, which Jesus called trust or faith. The (shelter) door (that God opens out of complex consciousness) is usually some form of suffering (physical, relational, emotional, intellectual, structural) for almost all of the enlightened & saved people I have ever met. ...Initiation always taught the young men to die before they died, and then they would begin to live.  Apparently it is the best and clearest way to put everything in proper order & alignment. As Saint Francis put it, "If you have once faced the great death, the second death can do you no harm." 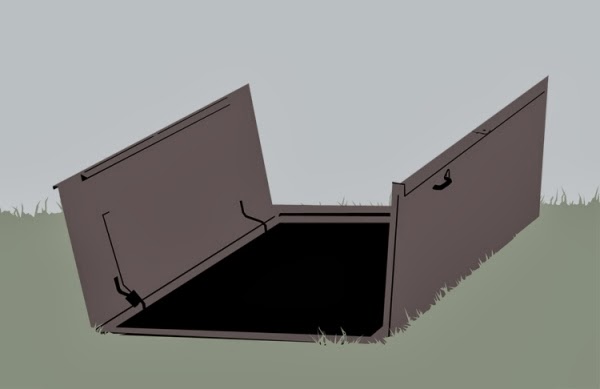 From this perspective, I believe the final moments of the film become much less ambigious.  As the "second death" approaches, instead of experiencing fear, shame, disappointment, blame, or insecurity, they experience a sense of empowerment in their connection - in their understanding of who they are and what they need - together.  They haven't "overcome" fear as much as they have accepted their limitations, their vulnerabilities, their need for a "higher power". They can stand together and confront the storm, rather than hide in isolation or divorce.  The innate feeling of powerlessness towards something bigger than themselves has become the power with which they can now encounter the unknown.  This shared vulnerability has become the foundation of their marriage.  And maybe for the first time, do they really understand what it means to become "one".

Samantha (whose name apparently means "God Heard" or "Listener") directly represents spirituality in the film.  She carries the inner strength & feminine resilience that belies Curtis.  She is the "spirit" that empowers Curtis to confront his fears.  She "knows" without knowing, and she gives sight to the blind.  She gives Curtis the necessary grace to fail, to learn, to become human - with appropriate boundaries, with emotional honesty, with confrontation.  In their darkest, most "grave" moment, she is mature enough to see "The" opportunity for resurrection.  She exemplifies the real meaning of marriage, and subverts the traditional white male (King James) interpretation of "submission".

She is absolutely "prepared" for the storm.

I love this film and this filmmaker. Jeff Nichols & Steve McQueen, both with three films under their belt, have different, but equally necessary cinematic perspectives that open up the conversation about what it means to love and be loved, and about what it looks like to evolve as emotional creatures in an anti-emotional modern world that defines "progress" in technological terms rather than psychological. Along with Wes Anderson & Terrence Malick, their films express something of what it means to confront death & vulnerability as the means to reconcile our inherent brokenness in relationship to each other, and in relationship to God.