Back in 2016, I wrote, "I found Captain America Civil War fascinating for it's willingness to confront the consequences of justified violence...particularly with Black Panther who enacts a bold, powerful, and personal (rather than political) act of non-violence." Having seen most of the Marvel Cinematic Universe films, the Captain America trilogy has the most to offer in terms of complex character development and narrative structure. CACW is The Dark Knight of this decade, seamlessly weaving together superb entertainment with complicated grief, questions of moral responsibility, political exposition, and the ethics of justification. Truly impressive.

Black Panther is introduced in CACW, traveling with his father King T'Chaka to address the UN regarding recent acts of violence in Africa involving the Avengers. A terrorist bombing kills T'Chaka - which integrates T'Challa (Black Panther) into the various dilemmas confronting the split super-factions. Iron Man leads the White Guilt liberal side, while Captain America's side maintains his 1940s conservatism. T'Challa caring more about the truth than politics, advances himself to a moderate distance, observing and learning before acting. This allows him the objective (but still empathetic) position to confront major villian, Helmut Zemo (who has lured Iron Man & CA into violence against one another).

T'Challa explains to Zemo, "Vengeance has consumed you. It's consuming them. I'm done letting it consume me. Justice will come soon enough." Zemo tries to commit suicide, but T'Challa won't allow it. "The living are not done with you yet", he proclaims with a mix of compassion and justice. Continuing down this spiritual path, T'Challa also grants Bucky Barnes asylum in Wakanda, offering to free his mind from captivity. Black Panther in CACW brings a sacred energy (beyond vibranium) that allows for new possibilities, new choices.

Marvel's Black Panther (2018) film is set in the days following the events of CACW. We quickly catch up with T'Challa traveling back to Wakanda, who makes a stop somewhere in rural Africa to obtain Wakandan missionary/warrior Nakia - so she can attend T'Challa's coronation ceremony. She is undercover, riding with (kidnapped?) women who are being transported by an African military convoy. Unfortunately, this extraction requires the unprovoked violent extermination (rather than de-escalation) of the heavily armed soldiers and subsequently, the awkward abandonment of innocent women and children in the dark of night. (Why can't they hitch a ride on the Wakandan aircraft?) Already, we seem to have departed from the ethical concerns & spiritual consciousness of T'Challa in CACW. It's a small scene meant to introduce characters, but there is still an opportunity to philosophically separate yourself by how a situation like this is handled. (Not to mention the technological possibilities of vibranium) Is King T'Challa not capable of offering something more? 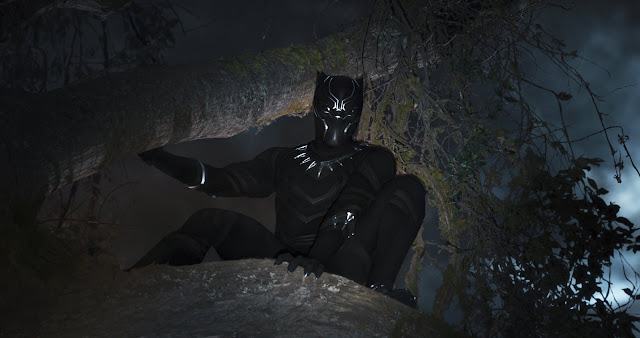 The prologue previous to the Nakia pick-up was a flashback to 1992 in Oakland, CA (with Too $hort, rather than Tupac, on the radio) where King T'Chaka is seemingly forced to kill his own brother (Prince N'Jobu, Wakandan spy) - who pulled a gun when confronted with the truth of his underground activities. The situation has an Old Testament vibe to it, but still perpetuates the Black on Black violence narrative (as above). This too could have been handled differently, but was focused on the ends (rather than the means) of introducing the backstory of our villain, Erik Killmonger, the newly orphaned nephew of the King.

I know I am holding Black Panther (2018) to higher standard, but if there was even a hint of internal conflict in either of those initial sequences, it would be less an issue. The question I keep wrestling with - How can T'Challa be a champion of non-violence with Whitey Zemo in Civil War - and only days later commit acts of violence without provocation against his own people - and have nothing to say about it? It doesn't translate.


There obviously aren't many spiritual concerns in the film, but the narrative is heavy with resurrection symbolism - no less than three times. Not once does the symbolical or literal act of "rising from the dead" broaden the perspective of T'Challa or Killmonger. (is The Matrix really that old?) Like Shape of Water, it breeds something smaller. Killmonger arises bent on destruction and power. "Burn it all!" he yells. T'Challa rises (for the second time) only to violently confront his own people. Is that really his only option? Can he not emotionally flank this situation? Killmonger is a wounded orphan. Maybe he just needs someone to (seriously) listen to him? To include him? Both their father's failed to listen - isn't it now T'Challa's responsibility to right this wrong? Can't we dig a little deeper? (Maybe takes some notes from The X-Men?)

Why introduce emotional trauma if you can't follow through? I don't understand. Ryan Coogler intuitively handled these issues in the non-political, humane portrait of Oscar Grant in Fruitvale Station - and of course again with the exceptional Creed. (Of note - the Michael B Jordan characters in all three Coogler films are fatherless) This makes me think Coogler was somewhat restricted by Marvel. An obvious loss, if so. 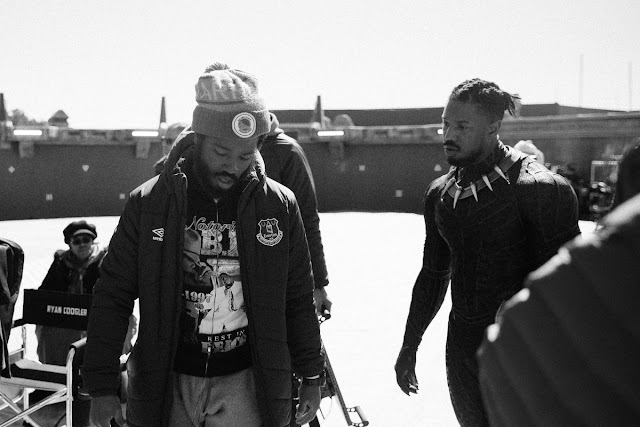 "I'm telling you God's words, not no hustle. Remember that, Brother Baines?" asks Malcolm X upon learning the layers of moral & spiritual betrayal within the Nation of Islam in Spike Lee's 1992 landmark film. Baines had led Malcolm to salvation in prison, but Malcolm's true baptism would come after his voice, power, and position were stripped of him. Maintaining dignity, he journeyed to Mecca, seeking God & Truth beyond the hypocrisy of Elijah Muhammad. There he found a deeper salvation, a stronger integrity, and new eyes to see the people around him. It was for this perspective that he would be martyred. Erik Killmonger's story shares some similar themes with Malcolm's. They lost their fathers to violence, grew up in poverty, experienced betrayal at the hands of those who had promised protection. They were both victimized by systems of oppression, but only Erik maintains a victim narrative - becoming a self-inducted martyr for it (at the hands of the screenwriters). Where is Killmonger's Mecca? Is he just another monstrous villian?

Killmonger is fatally wounded by Black Panther in the final moments after a long chaotic mess of a fight scene. T'Challa brings him to the summit and offers compassion & hope..."We can still heal you." Killmonger, assuming the worst, replies, "Why, so you can lock me up!?" This is a good, but ultimately insecure question. T'Challa is unfortunately not given a chance to answer.

Killmonger goes on, "...Just bury me in the ocean with my ancestors who jumped from ships, 'cause they knew death was better than bondage." I can't argue with his ancestors, but why are the screenwriters so intent on Killmonger being imprisoned by his anger and rejecting reconciliation with his own people? Is he not more than his victimized narrative? What about listening, healing, forgiveness, empowerment? What is honorable about suicide? Is the audience supposed to empathize with this decision? I hope not. Sounds like sympathy at best.


Worse still, T'Challa, who delayed Zemo's death because "the living aren't done with you yet" is somehow indifferent to intervention here with his own cousin (who obviously cannot see beyond his own emotional wounds and doesn't have the spiritual maturity to choose life). Why the sudden apathy? How much more redemptive would it have been if Erik Killmonger was with T'Challa and Shuri in Oakland to begin work on their first outreach center? Full circle in his own neighborhood. Seems like a glaring omission. Unless there is something I don't know (maybe they save Erik anyway - and he heals alongside Bucky?), the Killmonger narrative was essentially a complete failure.
"Vengeance has consumed you", indeed.

His name was N'Jadaka, son of Prince N'Jobu. He deserved better.


*Lyrics from the Black Panther soundtrack (written by King Kendrick Lamar)
...
Posted by Kyle Meyers at 8:28 AM