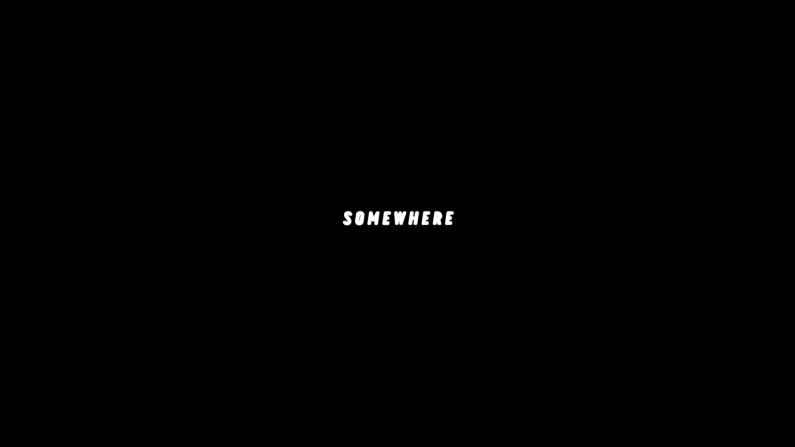 "He is (lame).  He just happens to be there...sitting somewhere.  He doesn't have any initiative or determination.  He doesn't ask for anything.  He does what (his publicists) tell him to do, but we (rarely) hear a word from him.  He does not make life happen, he waits for others to make it happen, and then perhaps reacts.  He's not going anywhere with his life, and he doesn't even care that he's not going anywhere.

This description fits all too many men today, not only in our American culture, but in much of the world.  Most men do not know how to motivate themselves.  If they have any motivation at all, it is for some form of immediate money, sex or power.  Nothing more.  They have no internal motivation, and without the external motivations of sex/power/money, they do not know how to choose or make decisions about what they want to do with their lives." Richard Rohr OFM (Three Kinds of Men) 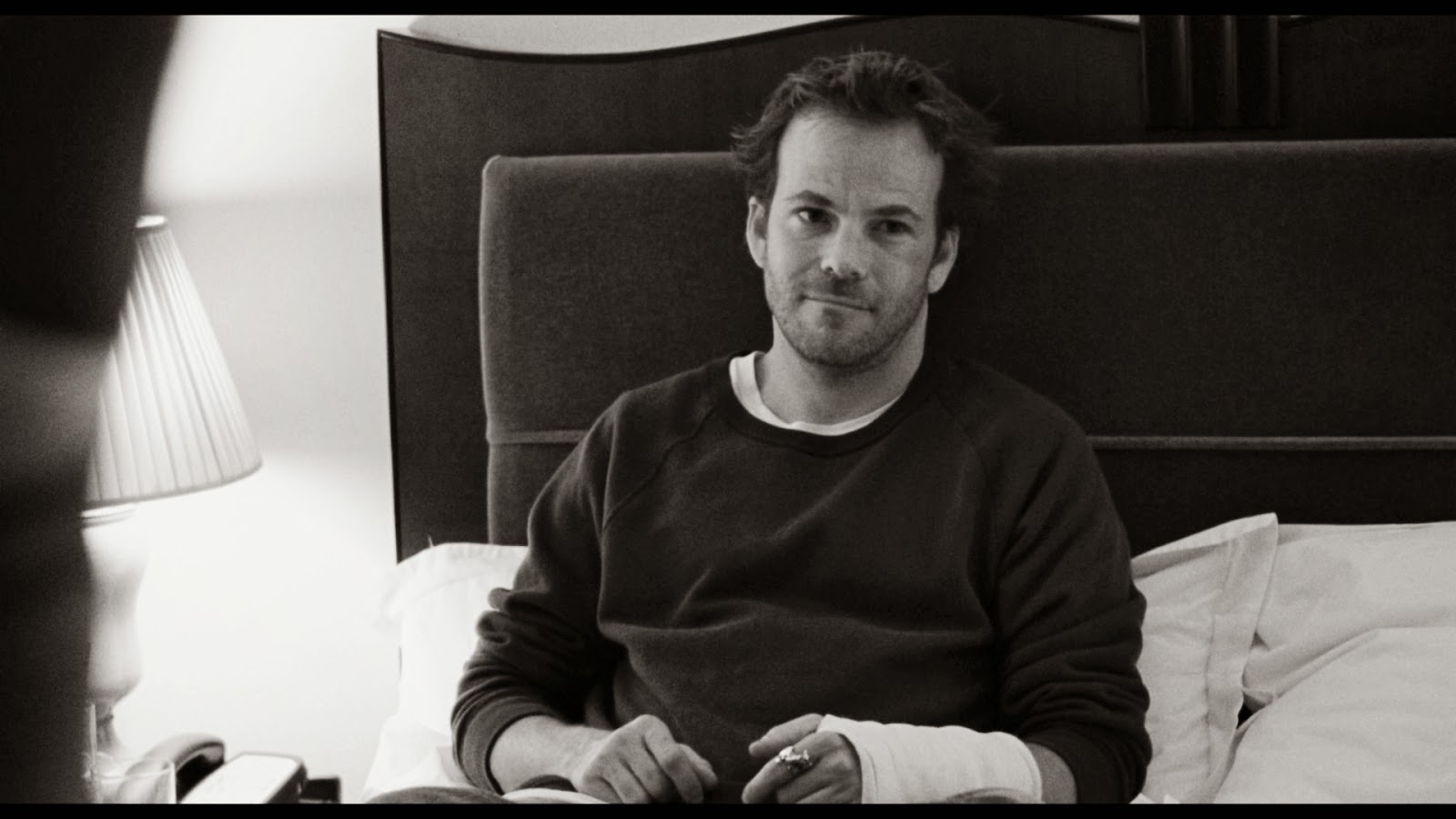 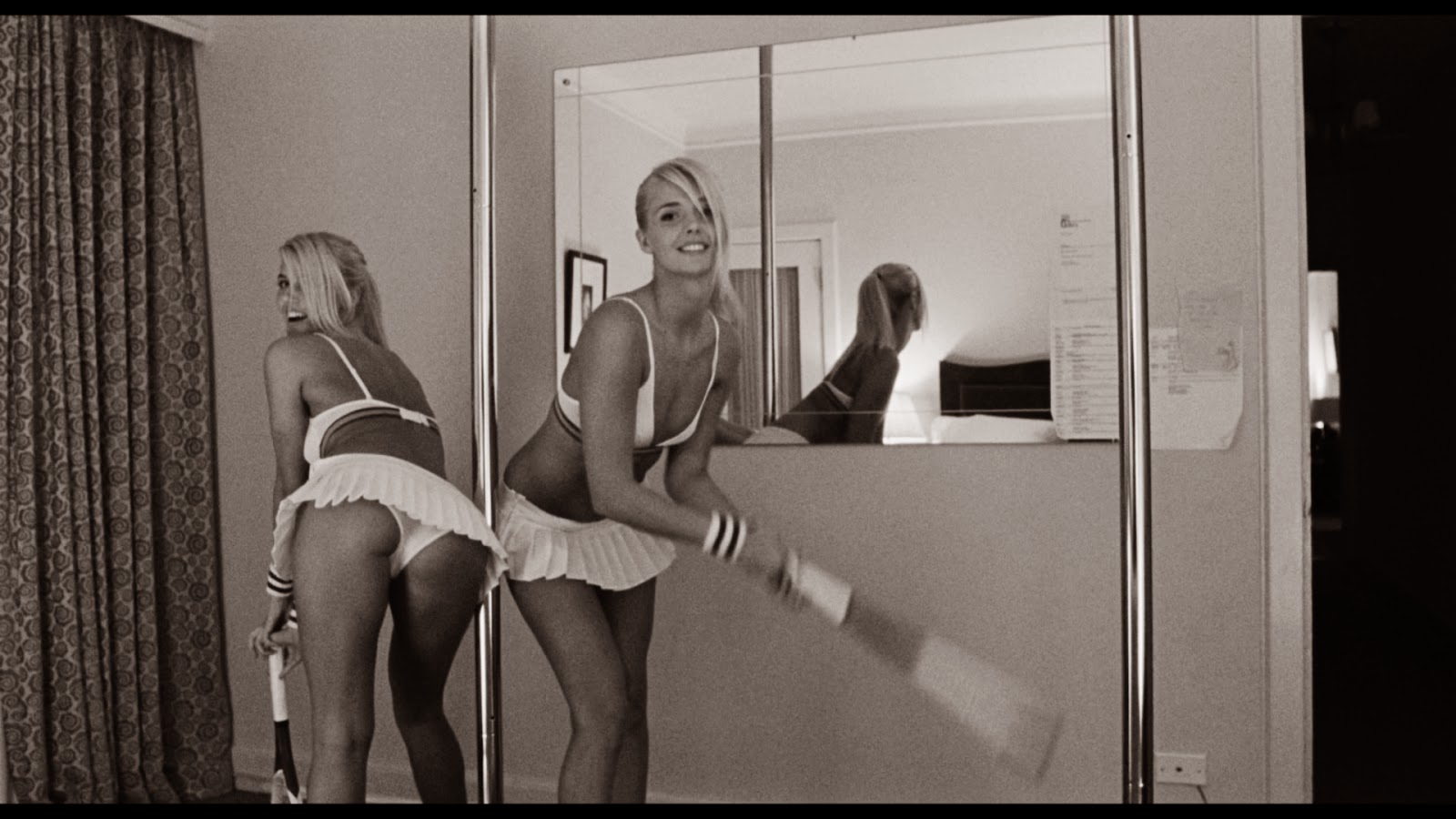 For all of Somewhere's overt geometrical symbolism that bookends the film, we are unfortunately left with too few (if any) emotional touchstones.  "I'm fucking nothing.  Not even a (film)".  It's more lost in translation than Lost in Translation.  I am always intrigued by Sofia's interest in seeking out something human in the world of extreme privilege & excess, but she seems so opposed to her characters potentially Breaking Bad that she instead breaks bland - especially with Johnny Marco.

I disagree with Ebert that Johnny is experiencing depression.  There seems to be no internal dilemma or discontentment which may be cause for some form of chemical imbalance - or vice versa.  He isn't apparently experiencing anything except a brief buzz or erection - neither of which he seems to really desire as much as sleep.  He has no emotional life, and doesn't seem aware that such an experience actually exists.  He seems confused when he receives various text messages that asks "why are you such an asshole?" or "what's your fucking problem?".   When asks if he studied method acting, he replies that he doesn't really follow a particular method. :)  When asks "Who is Johnny Marco?", he replies, "ummm...".

All this seems to suggest that Sofia intentionally created an extremist white male character of excessive privilege with no inner (spiritual/emotional) life.  He isn't even self-possessed enough to be a true narcissist.  He just seems removed - mostly childlike in his interactions - extremely obedient.  An arrested adolescent who is neither content or discontent - who doesn't experience guilt or shame or happiness or joy.

It feels like an (opportune) indictment on the Utopian fantasy of white male privilege - money, sex, celebrity, privacy, and non-ethnic ubiquity (with the exception of non-white servants of course).  All this without apology, awareness of other, desire for meaning, or (subversively) without need to violently defend or justify these fantastical circumstances.  ("ummm")  Somehow though, it doesn't translate as an indictment - as one (white male) review states, "Her film captures this sense of wonder and of estrangement from self..." - as if that is something we should want to experience or "capture", which only seems to confirm the fantasy (even if inadvertent).  What was meant to be poetic, might (beneath the surface) actually be political.

The film ultimately, however, seems to fail as a poem or a politic. Cleo (12 year old daughter) is supposed to be the vehicle of awareness & change for Johnny.  (This is where the film really begins to lose it's ground.)  She is juxtaposed against every other dehumanized, objectified female in the film - which appears to be the point - but Johnny only recognizes this in the most extremely subtle of ways (as if Sofia is intent to avoid any emotional device within a thousand yards of melodrama), which makes the final (could have been really powerful) scene completely unearned as either reality (walking dead?), symbol (into the wild?), or metaphor (shawshank?).

To help me explain, I will default to a portion of Kartina Richardson's enlightening review...

The banality of the surface is an attractive and easy subject to explore successfully for those wishing to create art, but who, for whatever reason, are unable to think about the metaphysical ideas that make great film great films. This is because they have vulgarized trying. They are minimizing. For lack of better articulation at the moment, I will awkwardly call it the “Countersignaling” movement or aesthetic.

(In Coppola's films, and films that share a similar style (I hesitate to use the term mumblecore because it’s farther reaching than that), trying is not only vulgar but unenlightened; trying to be sexy, fancy, feminine, masculine, or successful. Trying to do anything big is bad. In a small way this is good; there is no shortage of awful hollywood blockbusters that promote ridiculously plastic ideas that confine.)

Countersignaling is an aesthetic unique to the very privileged. Of the young, white, educated, liberal, upper middle/middle class. It isn't a celebrated attitude of poor Americans, or the children of immigrants, or Americans of color of any economic class. It isn't an attractive aesthetic to those who have already been minimized by the world and fight against that to assert their value.

But as much as I dislike the aesthetic I do understand why it exists. Countersignaling is a reaction to plasticity. Money grants automatic importance and for many liberal, artistic, educated folk, that privilege leads to discomfort and guilt. But a caving to that guilt instead of true examination, turns the artist’s work into a constant minimizing. The result then is false: If it were actual minimization the film itself would not exist. The very act of making something is, to to varying degrees, asserting your voice, asserting your importance, trying. So the film is reaching. Reaching in every way for diffidence (shot composition, costume, music, casting, etc) when real diffidence is not actually there.

The mundanity of our realities and the moments we escape numbness are actually extremely interesting. Appealing because they have both light and dark sides, but Coppola only makes small comments on the surface of these moments. She never delves deeper. I don't want to see characters sweetly discovering and experiencing these moments. I’d much rather see characters creating escape like Kit in Terrence Malick’s 1973 film Badlands. 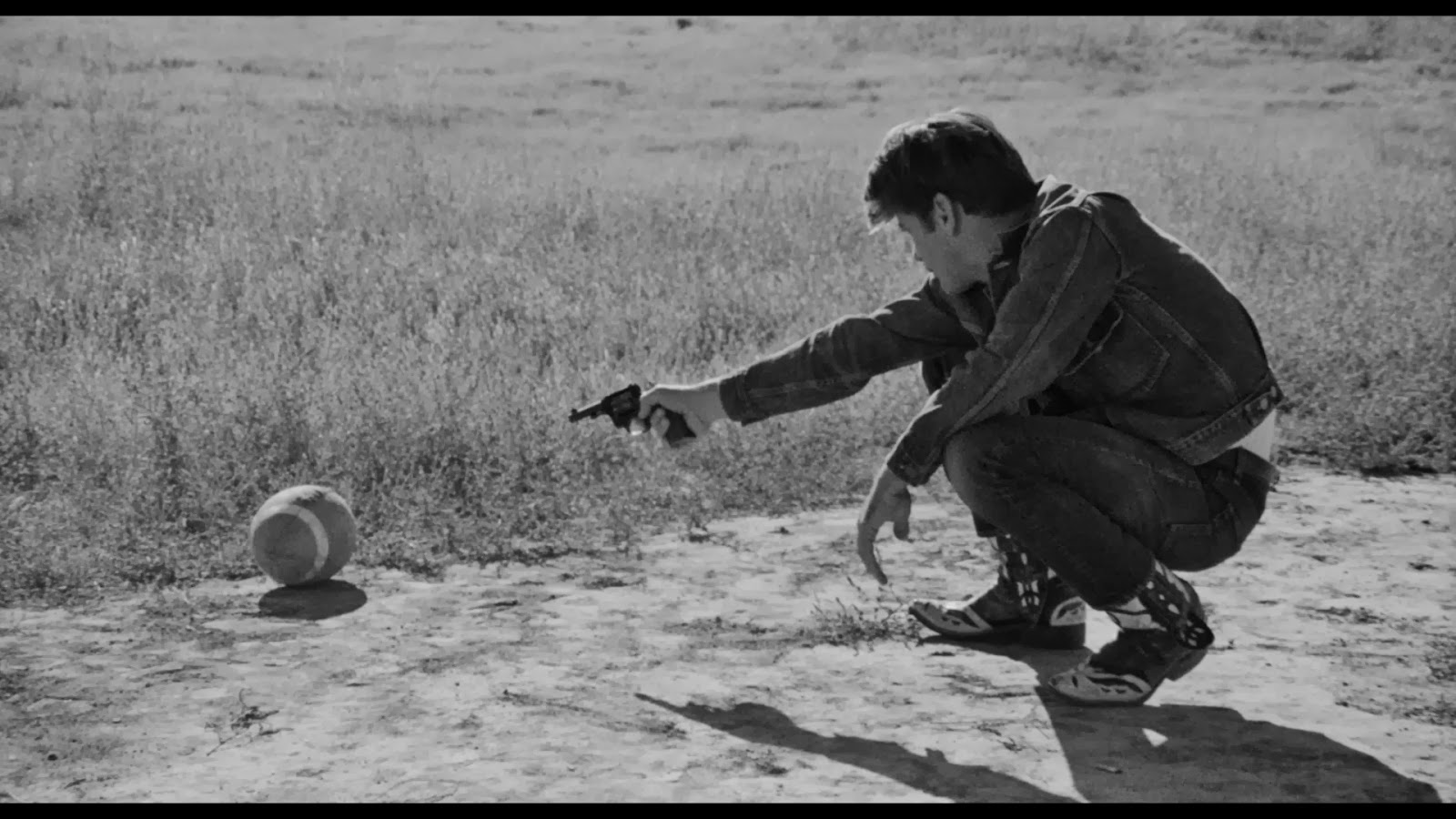 As the engaged observer, I was desperate to discover, experience, and grieve with Johnny his "nothingness" - his emotional poverty - his need for maturity - his need to be known - as I have been able to do with Kit, Jake LaMotta, Freddie Quell, Solomon Northup, and even Llewyn Davis.  Sofia did not allow me that grace, because she never allowed Johnny to experience it for himself. That makes me question her own relationship with grace.  After-all, this is her third film about this particular "condition" of celebrity.  Even if I understand what this trilogy might mean for us - I am even more curious about what it means for her.  The scene where Johnny is sending Cleo off to camp, he yells, "Sorry I haven't been around!".  She can't hear him due to the loud helicopter behind him - which felt reminiscent of Apocalypse Now footage, where Sofia would have been close to Cleo's age.  Is she subtly grieving her childhood - or feeling antagonistic about Hollywood?

Is she using these three films to confess her own privileges as an "independent" artist?  Or hide them?

Who is Sofia Coppola?