“Raging Bull” is not a film about boxing but about a man with paralyzing jealousy and sexual insecurity, for whom being punished in the ring serves as confession, penance and absolution." - Roger Ebert 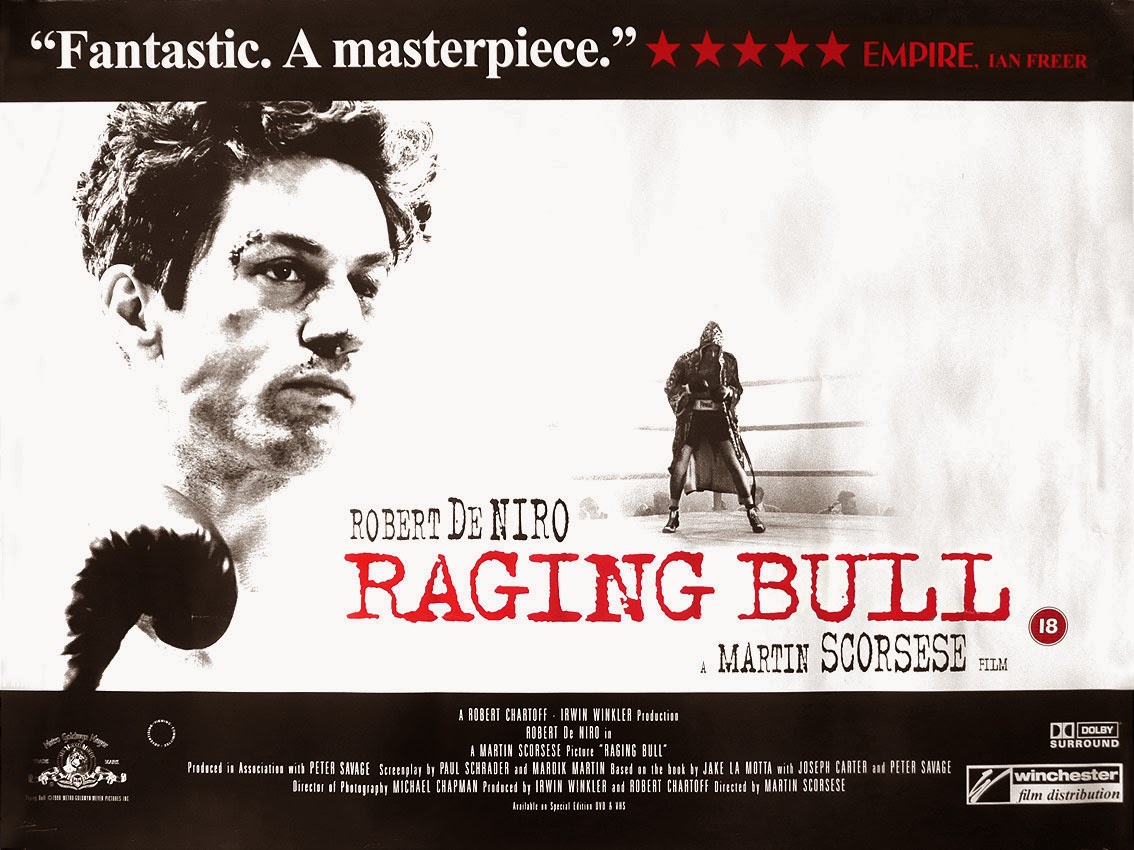 This wasn't a film Martin Scorsese cared about creating. Robert De Niro had been trying to get it launched for almost a decade (with Scorsese in mind), but Marty had never been interested in sports, especially boxing. Fascinating then, that Raging Bull would become one of his most personal artistic expressions. Scorsese's previous film New York, New York had failed critically and bombed at the box office. He was going through a divorce, and he eventually landed in the hospital due to cocaine abuse. This experience is sometimes known as "hitting your bottom".  It's a crisis of limitation that often leads to grieving losses/failures and engaging self-confrontation/self-reflection. Raging Bull evolved from this process within Scorsese as he discovered himself within the fragmented, emotionally impoverished character of Jake La Motta. It was here he realized that "the most difficult opponent in the boxing ring is yourself".

(Raging Bull went on to become the capstone of the New American Cinema. Like many films from that era and before, the combination of deep introspection with dramatic dreamlike images is what we have come to know as cinema or cinematic.) 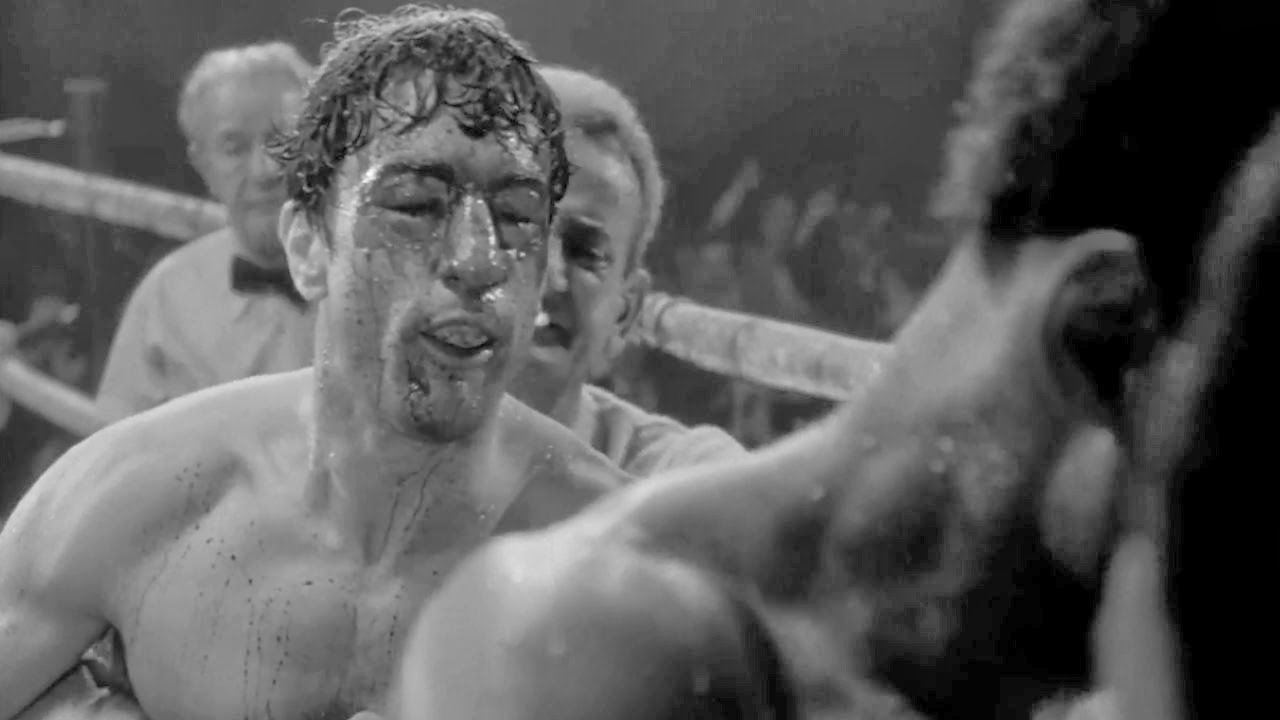 Scorsese ends the film (not really a spoiler) with a semi-confusing title card that is more suggestive of his own awakening process than of the protagonist...

A second time they summoned the man who had been blind.

“Give glory to God by telling the truth,”they said. “We know this man is a sinner.”

He replied, “Whether he is a sinner or not, I don’t know.

One thing I do know. I was blind but now I see!”

The often misinterpreted scripture quote from John 9 seems to serve two or maybe three purposes. First, it was a way of honoring one of Scorsese's professors (a significant mentor) from NYU who had died just before the film was finished. Second, it's (again) about Marty's personal "rehabilitation" process, himself stating that he had "learned something" or gained some insight through this wilderness filmmaking experience. However, Scorsese also suggested that the quote was in part for the audience, who may find themselves passing judgement on La Motta, rather than embracing the opportunity to 'see' and understand this violent man as a mirror of ourselves and our society.

This 'mirror' is essentially the spiritual core of every lyrical image in the film.

Religious imagery, iconography, and rites of service are embedded in almost every scene. The icons are often observers of sexual dysfunction, brutal violence, and emotional dishonesty. La Motta's world is hyper-religious. It's full of his own controlling, paranoid expectations for how others should meet his demands (before he has even articulated them). He creates his own religion of violent, toxic narcissism. Even more than his judgement for his friends & enemies, he condemns himself to brutal punishment, where he must be severely beaten, but can never allow himself to 'fall down'. Back in his corner, it even seems that he is being administered his last rites by his manager. "Confession, Penance, Absolution." 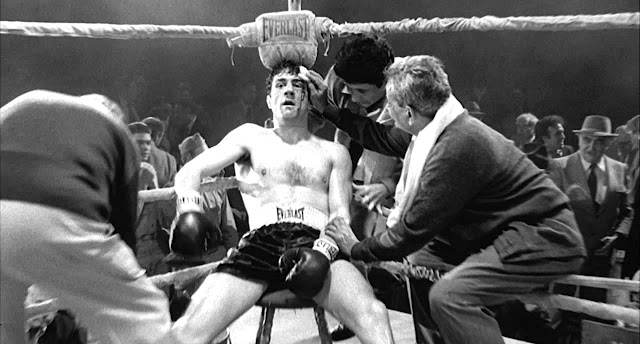 At his most broken & isolated, we find him sixty pounds heavier in a dark (night of the soul) jail cell, full of animosity for himself as he literally bangs his head & fists into the wall. He cannot breakthrough the dense barriers that have divorced him from his people & place. But at least he can see and feel them physically realized. 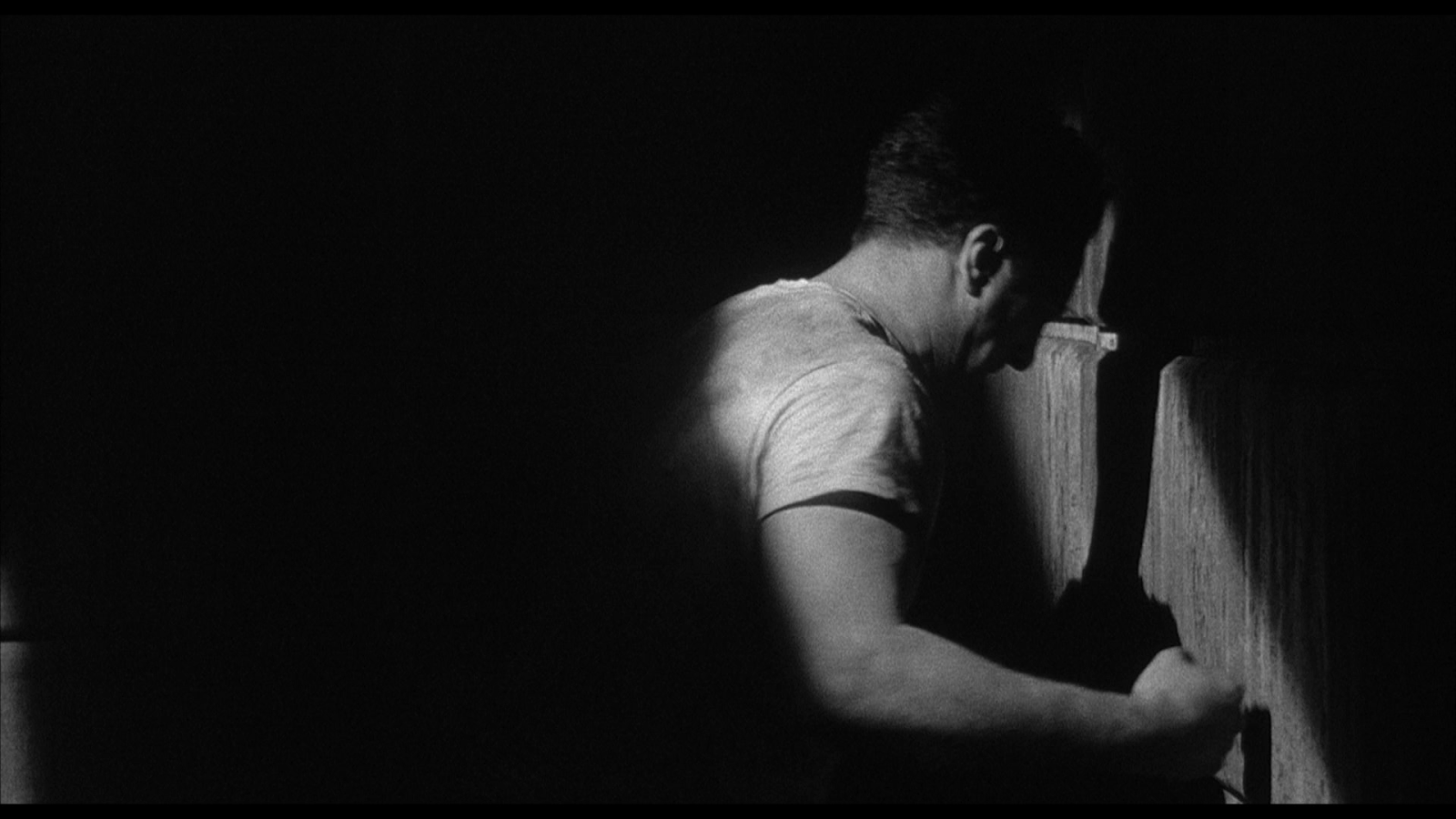 The final scene has Jake La Motta quoting Terry Malloy (Marlon Brando) from On The Waterfront. It's the "I Coulda Been a Contender" monologue. It is interestingly layered, to say the least, as he looks in the mirror confessing to himself...

"You don't understand...I coulda been somebody, instead of a bum, which is what I am, let's face it." 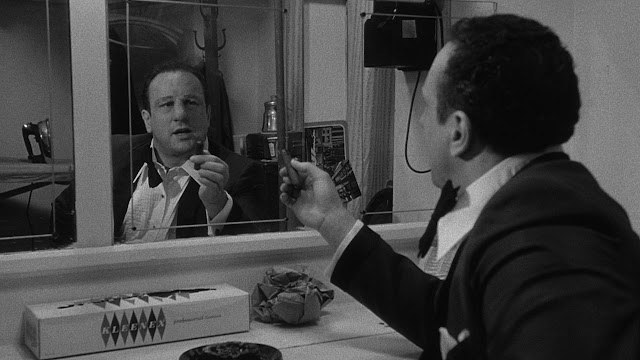 I believe that Raging Bull depicts the industrialized male experience just as deeply real & symbolic today as it was almost 40 years ago, about a man from 70 years ago. Technological 'progress' has also failed, as we still find ourselves locked up in our own prisons of insecurity, shame, and suppression, without sight of our internal opposition, resistance, and anxiety. However, we are not just the prisoners, but also the guards - and like Scorsese, we might just find the keys in the places we thought the least likely.

“Whether he is a sinner or not, I don’t know.
One thing I do know. I was blind but now I see!”